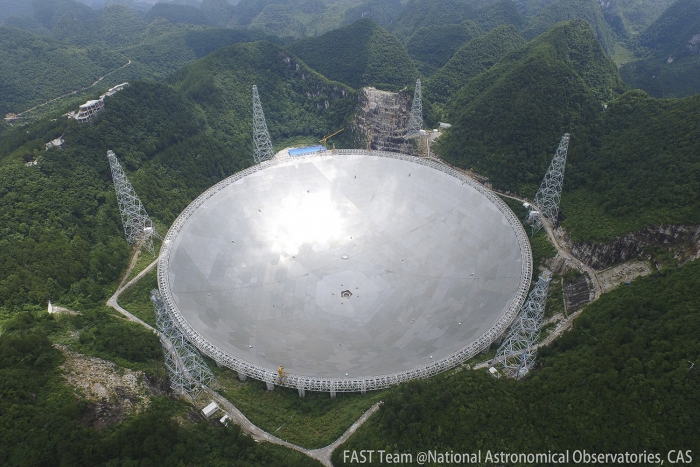 Two of the most powerful telescopes in the world worked together to find the faintest millisecond pulsar ever discovered. The collaboration between the Fermi Large Area Telescope and China’s FAST radio telescope was spearheaded by Stanford physicist Peter Michelson.

The image shows China’s 500-meter Aperture Spherical Telescope (FAST). With Stanford Professor Peter Michelson as the principal investigator, the Fermi LAT team, an international collaboration, has discovered hundreds of pulsars since its launch 10 years ago. FAST’s enormous 500-meter diameter dish makes it the most sensitive radio telescope on the planet for detecting millisecond pulsars. The Fermi LAT collaboration has been international from the start, involving hundreds of scientists from institutions in the United States, Japan, France, Italy and Sweden. Since its launch, scientists from China, Germany, Spain, South Africa and Thailand have joined the team. From a scientific standpoint, the finding is significant because it suggests future discoveries of many more pulsars which may help detect low-frequency gravitational waves.

Michelson is proud of the team’s discovery but is most proud of the collaborative effort. “It’s not just the science. The part I think is important to me is that it’s truly an international collaboration,” he said. One of the reasons he thinks collaborations are so important: “Particularly with countries we sometimes have strained relations with, it’s important to work on things where you share a common purpose and there is a benefit to all involved. That’s important in the long run.”

International collaboration also has cost benefits due to spreading the cost of capital-intensive facilities. Tech Scouts can find leverage in these international efforts. Stanford Industrial Affiliate programs encourage such collaborations.