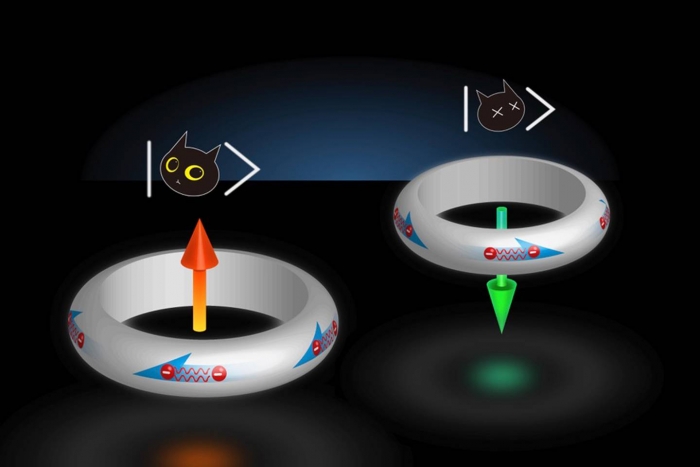 The material naturally exists between two states, a finding that could pave the way for more complex computing in the future. Quantum computers with the ability to perform complex calculations, encrypt data more securely, and more quickly predict the spread of viruses may be within closer reach thanks to a discovery by Johns Hopkins researchers.

Quantum computers, based on the laws of quantum mechanics, use quantum bits, or qubits, which not only use two states, but also use a superposition of those two states. But in order to exist between two states, qubits using traditional superconductors require a very precise external magnetic field be applied on each qubit, thus making them difficult to operate in a practical manner. In the new study, Li and colleagues found that a ring of β-Bi2Pd naturally exists between two states in the absence of an external magnetic field. Current can inherently circulate both clockwise and counterclockwise, simultaneously, through a ring of β-Bi2Pd.

"A more realistic, tangible implementation of qubit can be a ring made of superconducting material, known as flux qubit, where two states with clockwise- and counterclockwise-flowing electric currents may exist simultaneously," says Chia-Ling Chien, professor of physics at Johns Hopkins and an author on the paper.

Dr Chien's team is next looking for a specific type of particle called Majorana fermions within β-Bi2Pd. Majorana fermions depend on a special type of superconducting material—a so-called spin-triplet superconductor with two electrons in each pair aligning their spins in a parallel fashion—that has thus far been elusive to scientists. Tech Scouts interested in spintronics and superconductivity might look more closely at this technology starting with the widget below.